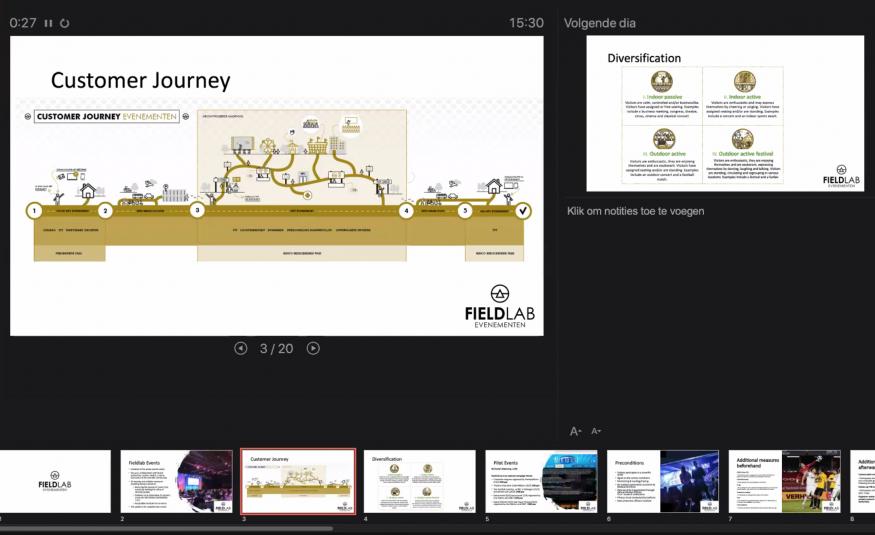 FITUR and Fieldlab directors share their experiences of setting up for safe shows in spring and capturing pilot data for sharing Europe-wide:

The 44th UFI Connects online session, 24 March, centred on Europe’s re-opening and, in particular, a focus on Spain and Holland. Special guests Maria Valcarce, director of IFEMA’s FITUR travel and tourism show in Madrid (19 May), Riemer Rijpkema, director of Dutch live events association CLC-VECTA and Pieter Lubberts, CEO Backbone International (both from the Netherlands) shared their experiences of bringing back some groundbreaking in-person events.

UFI’s Nick Dugdale-Moore curated the session, reminding participants of some big UFI conference dates for the diary: 26 May in Dubai for the MEA Conference; the UFI European Conference 9-10 June (now digital only) and the 88th UFI Congress, 3-6 November in Rotterdam.

Maria Valcarce opened the session with a message of resilience from Spain for the industry, appropriately in the week that IFEMA’s Hospitality Innovation Planet (HIP) tradeshow took place safely and successfully in Madrid (22-24 March).

“We are in a not bad situation and have overcome the third coronavirus wave,” Valcarce said. “The HIP event brought a breath of fresh air to Madrid and to our industry.”

“We have applied very strict Covid control protocols. We will also celebrate our fashion week show in April, another public exhibition about contemporary art and then FITUR in May.”

Valcarce stressed the importance of IFEMAs’s ongoing close relationship with the Spanish public administration authorities, particularly given the broad portfolio of IFEMA’s events across a range of industries. “Everyone recognises that IFEMA’s activities are very relevant for the generation of wealth, employment and the economy,” she said, noting that FITUR has its organising committee chaired by the chairman of Iberia, and ministers, representatives of IATA and the WTO also take part in its work.

“Tourism,” Valcarce stressed, “is a question of state.” It is an industry responsible for more than 12% of both GDP and employment and FITUR, celebrating its 40th anniversary, is a platform that represents the strength of this tourism industry. Valcarce added she was confident in the health measures and protocols in place for running a safe and successful FITUR show.

Marta Gomes from Viparis asked how long it had been before the HIP exhibition that IFEMA had received the final green light from the authorities to go ahead.

Valcarce replied that exhibitions were allowed in Spain provided organisers show the authorities a contingency plan, which has then to be approved. For HIP, confirmation from the regional government came a month before the show, she said.

She added that 2021 show would probably have around 65% of the net floor space of the 2020 FITUR show and that domestic participation would be stronger than international. This year 50 countries should be represented, Calcarce thought, compared to 150 in an average year.

In Holland Riemer Rijpkema said the only way to fight the pandemic was to work together, something that the Dutch industry associations had been doing, despite being not well organised initially. The big challenge, he said, had been to convince the Dutch authorities about the relevance of and the economic consequences, continuity, employment perspectives and financial support and measures needed to reopen the industry.

The industry associations succeeded in getting the ear of those in the corridors of power it seems. “It took a lot of energy but we were rewarded with several live and digital sessions with ministers,” Rijpkema said. The initiative involved the entire events sector, he added, and involved the government ministries and scientific community joining the team for the Fieldlab pilot programme.

Pieter Lubberts who managed the Fieldlab events, then shared a presentation on the project’s genesis and development, which illustrated how this event industry collaboration with the authorities and scientific community was designed. The aim, he said, was to influence the visitor along the whole customer journey and to limit the spread of Covid-19 at events.

The project included Covid testing, temperature readings and bubbles/cohorts for event attendee. Testing was done before hand in a central place rather than on site.

The large amounts of data collected enabled the group to assess the real risks of infection.

The eight pilot events included a corporate convention, a theatre show, a football match, a dance event and a music festival.

Lubberts shared some of the test results during the UFI session and said the aim was to share the study wider and work towards a European standardisation and agree a common roadmap for moving forward.