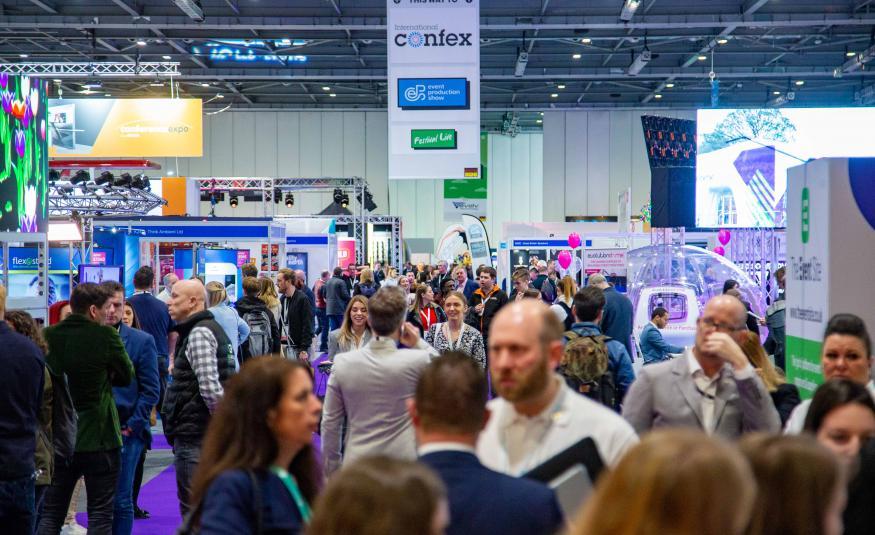 The latest, June, UFI Global Exhibition Barometer indicates a business restart beginning, but 44% of exhibition companies have ceased investing and a majority think we will be looking at fewer international exhibitions in future.

Results of global association of the exhibition industry, UFI’s latest, biannual Global Exhibition Barometer research shows, that, after monthly activities dropped sharply everywhere in the world, the exhibition industry is gradually starting up again. However, revenues for 2020 are expected to represent 39% of the 2019 figure and 44% of companies say they have stopped all investments.

Although the report highlights the severe impact of the Covid-19 pandemic on the exhibition industry worldwide, the mood is not dampened entirely and the latest Barometer finds a large majority of the industry believes the sector will come back quickly. It is a sector that is already morphing fast. The shift to digital is evidenced by every second company reporting increased investments related to digitalisation.

For those wanting to drill down further, the Global Barometer this time delivers dedicated profiles for 25 markets and regions. Whereas, globally, 85% of companies surveyed declared their overall level of activity was “normal” in January, the figure quickly dropped to 15% in March, reaching between 5% and 6% in April, May and June. For both April and May, 73% of companies worldwide declared “no activity”. With a majority of companies expecting local and national exhibitions to open again during the second half of 2020, activity is expected to slowly increase, and two companies out of three project at least a “reduced” level of activity in the last quarter of 2020.

International exhibitions not to reopen until 2021

In all regions, a majority of companies believe that exhibitions with an international scope will not open until 2021. Globally, revenues for the first half of 2020 dropped by two-thirds on average, the Global Barometer round, compared with the same period last year. In terms of profits, strong levels of performance were reached in 2019, with 45% of companies declaring an increase of more than 10% when compared to 2018. The sharp drop in revenues that occurred in 2020 has led to a loss for 39% of companies, and only 7% currently expect a stable or increased profit for 2020.

Investments in diversity and sustainability drop 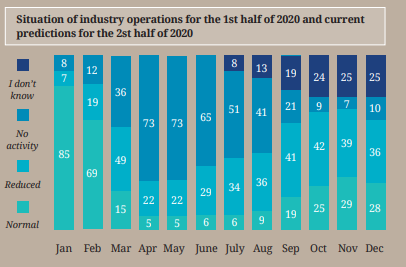 The survey also tackles trends likely to drive the format of exhibitions in coming years. Global results indicate that 57% are confident that “Covid-19 confirms the value of face-to-face events”, anticipating that the sector will bounce back quickly, whereas 31% are “not sure” and 12% are “not sure at all” or “disagree completely”.

“On the back of an exceptional year in 2019, we are now seeing an unprecedented drop in revenues around the world. While the industry remains confident that it will bounce back, everyone is aware that this crisis will lead to major changes in the way exhibitions are produced, especially with a push towards more digital elements before, during, and between events,” says Kai Hattendorf, UFI managing director and CEO, commenting on the results.

This survey, carried out in June, includes data from a record 459 companies in 62 countries and regions and delivers outlooks and analysis for 20 countries and regions: Argentina, Australia, Brazil, China, Colombia, Germany, India, Indonesia, Italy, Japan, Mexico, Russia, South Africa, Singapore, South Korea, Spain, Thailand, the UAE, the UK and the US. In addition, it analyses five aggregated regional zones.

Each region broadly follows the level of operations indicated above for the world, with two notable differences:

• The Middle East & Africa, and to some extent Central and South America, appear less confident as to the return to a “normal” level of activity than in other regions. In both those regions, a majority of companies expect that “national” exhibitions won’t open until 2021.

Other regional results indicate that:

• In terms of profits, the percentage of companies expecting a loss for 2020 varies from 34% in the AsiaPacific region to 48% in the Middle East & Africa, and around four companies out of ten in all other regions.

Overall, 87% of companies have been cutting costs, and 17% have cut more than 50% of their overall costs. A majority of companies say they have not received any public financial support. At the same time, 44% have, and for a majority of those, it related to less than 10% of their costs.

While 2020 investments have been stopped for 44% of companies globally, with a further 32% of companies saying they are cutting back, there are some significant regional differences:

- Financial public support is less frequent in the Middle East & Africa and in North America, where only respectively 31% and 38% benefitted from any.

- 60% of companies have stopped all their investments in Central and South America.

“Impact of Covid-19 pandemic on the business” is considered as the most important business issue (27% of combined answers). Also, for the first time, “Impact of digitalisation” (10% of answers) joins the “State of the economy in home market” (21%) and “Global economic developments” (18%) in the top priorities.

“Internal challenges” and “Competition from within the industry”, always in the top four most important business issues, are ranked below for this survey, with respectively 7% (15% six months ago) and 5% of answers (20% six months ago).

Notably, “State of the economy in home market” is ranked as the top issue in Central and South America, and the Middle East & Africa. 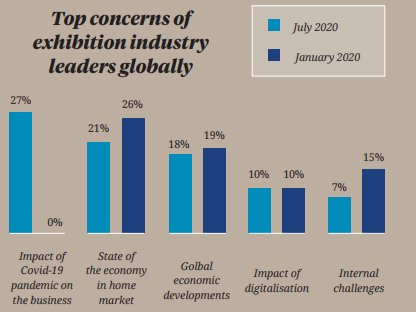 As far as possible driving trends, global results indicate that:

• A minority of 17% agrees with “Virtual events replacing physical events” (3% “Yes, for sure” and 14% “Most probably”), and 20% are “Not sure”. There is one significant regional differentiation:

• “Virtual events replacing physical events”, with stronger and opposing views – from Europe, where 80% of companies disagree, and from North America, where “only” 50% do.

The 25th UFI Global Exhibition Barometer survey was conducted in collaboration with 17 UFI Member Associations. The full results can be downloaded from the UFI website.