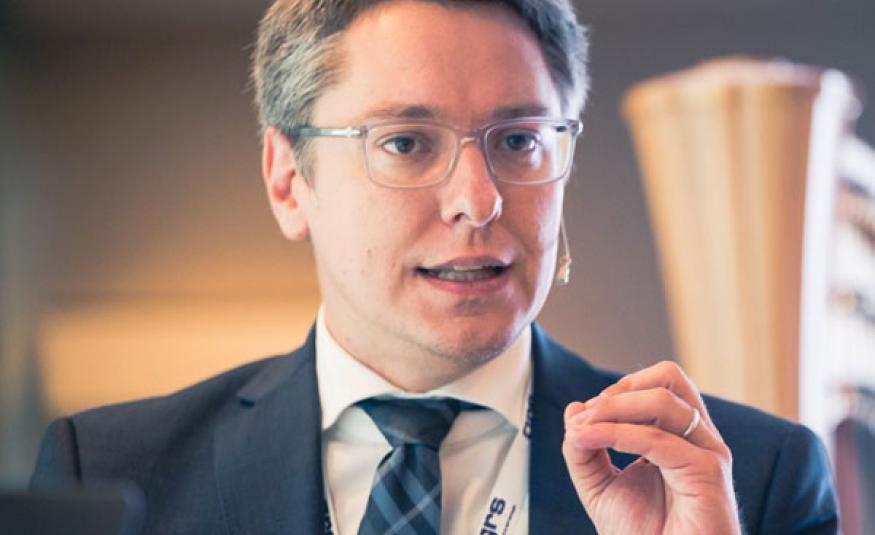 Blockchain presents a great opportunity for the world of exhibitions and events. Enrico Gallorini, co-founder, CEO of GRS Research and Strategy examines Blockchain, unpacking the discourse into six accessible parts, including: the role of exhibitions; Blockchain and smart contracts; an example from the exhibition sector; and the journey ahead (for exhibition organisers.)

Part 1: An introduction to Blockchain and its connection with the world of exhibitions
The world is getting ready for a new industrial revolution, an extremely profound, interesting one in the eyes of those who witnessed the Internet revolution of the 1990s and are able today to better understand how to seize this big opportunity in the right way, at the right time.

Imagine being in 1995 and somebody starts talking about the web... It is nearly the same time, only now people talk about Blockchain. We are at a still early stage where everything is yet to be imagined and built, but the foundations are incredibly solid and opportunities may be rethought, just like those which led to the creation of companies, like Google, Amazon and eBay, or other big players which reinvented themselves, thus becoming even bigger, such as Apple, Oracle, or Microsoft.

When talking about Blockchain we need to put together elements which, though essential to any business, are seldom connected to each other.

The [six] assets underlying this new industrial revolution are:

In addition to these, it is worth considering the decentralisation of the power of intermediation and the value of data and information which everyone possesses.

Gallorini explains that this set of important concepts, and the way they have been blended together, have the potential to revolutionise, and may have a huge impact on consolidated sectors or even elements related to democracy and solidarity.

In this new scenario, the world of exhibitions has a great opportunity, since an important part of the creation of value of an event lies indeed on some of those Blockchain assets. 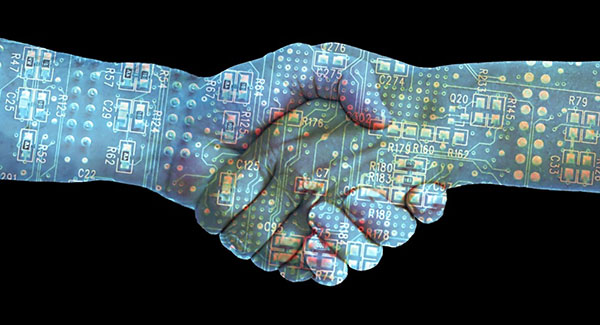 Trust
In particular, trust – which we can conceive as the reputation, the brand, and the ability to generate business inherent to every exposition – is a key element to the whole Blockchain discussion.

Exhibitions contain a series of features which constitute the the notion of “trust”. This notion underlies the very nature of the trade fair industry, in which exhibitors are confident about generating business, i.e. they believe they have a tool to enable their activity to grow and create value.

Apart from this, exhibitions benefit from “contact”, another element which is essential to the deepest forms of trust.

Lastly, another key element of exhibitions is “ritualism”, which is the firm knowledge that, in a given period of the year, in a given location, the whole system in which a certain company operated is gathered to build value. This aspect further strengthens the feeling of “trust”.

The latter is also connected to the following Blockchain asset.

Community
By its own nature, every exhibition is the summit of the business meetings of a business community, regardless of its specific sector.

It doesn’t matter if they deal in mechanics, food, technology or cars; in that specific moment and in that specific physical place, the magic happens when a whole community gets together in real life.

Transparency
The aim of an exhibition is that of bringing supply and demand together, without intruding into specific dynamics between suppliers and customers.

Every exhibition’s business model is exactly based on “transparency”, which means that the nature and the very success of a show derive from the fact that the organiser does not “side” with anyone nor have any specific interest in that particular business field. To make just one example – the organiser of a food exhibition must not be a dealer in a product on display or sale nor have any other specific interests in it.

This element is central to the reasoning underlying Blockchain.

Sharing
Exhibitions are events which [often] attract “under the same roof” entities that compete if not contrast with each other, or that simply don’t know each other, though sharing the same action field and goals.

Sharing, as in the capacity to abandon a “possessive” logic (e.g. with customers), is pivotal to the an exhibitor’s decision of participating to an event; he/she, following a network-externality logic, realises that the power of the exhibition tool is indeed based on the fact that all the players share the same space at the same time as well as the same target.

Goal orientation
According to Gallorini, every eexhibition has one clear goal: to make demand and supply meet.

This extremely simple factor of the system, which explains the very reason to exist of a trade fair, is one of the most important ones when discussing Blockchain. We are at a such early stage that having more than one goal could make any player in a certain sector miss a valuable opportunity.

Cryptography
The exhibition system is increasingly becoming aware of the importance of the information in their possession, and of how central to the future of their businesses it is to focus on a careful and detailed handling of information, especially as regards the use of the “right” data for the “right” customers.

Let us give a look at the basics first... 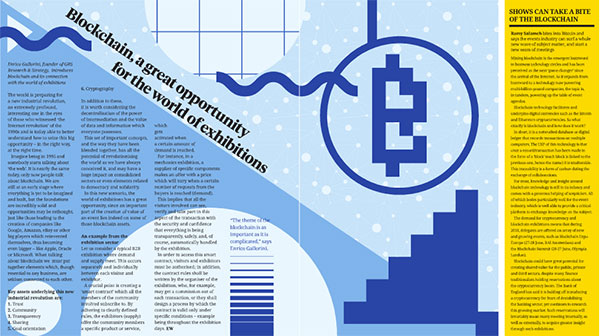 Part 2: What is Blockchain?
This term is undoubtedly becoming one of the most trending topics in the business world. Many people perceive Blockchain as the new generation of the Internet; yet, from a technical point of view, we should rather see it as “the new Internet”.

In fact, it is believed that Blockchain may represent a sort of “Internet of transactions” or, from a non-economical perspective, it represents the system of a new “Internet of value”.

Many believe that this new approach to digital is linked to the groundbreaking change we are bringing about ourselves, that is the need for decentralisation (direct decision-making), transparency (assessing what lies behind), security and immutability.

From a practical point of view, still today there is confusion between the notion of Blackchain and its most popular application, Bitcoin, a digital currency, better known as cryptocurrency. This is also why people tend to associate Blockchain to a “payment service provider”, or to an investment tool or new generation finance. Actually, this is only one of its many fields of application.

We need to understand that Blockchain is much more than a technology; it is truly a paradigm, a way to interpret the broad theme of decentralisation and participation.

Part 3: The role of exhibitions. Blockchain and smart contracts
Smart contracts have already been the object of experimentation in the 1990s when the existing technology permitted it, but their concept actually dates back to the mid-Seventies. The necessity at the time was to manage the activation and deactivation of a software license under some simple conditions. This license was de facto handled through a digital key enabling the software to operate, provided that the customer had paid for the license, and to terminate its functioning at the contract’s expiry date.

This Blockchain-based smart system, which exhibitions could be pivotal to, is based on several of the aforementioned concepts, but one of its possible applications is essentially the creation of an automatic contract called a "smart contract", which gets activated under specific conditions.

Smart contracts need legal support for their drawing up, but not for their verification or activation.

Smart contracts make reference to behavioural standards and standards of access to certain services, and are provided, accepted and implemented also as a development of traditional services. A smart contract is the code-based “translation” or “transposition” of a contract in order to verify automatically whether certain conditions are met (basic data check), to automatically perform actions (or delegate the performance of these actions) as long as the terms negotiated between the parties are met and verified. 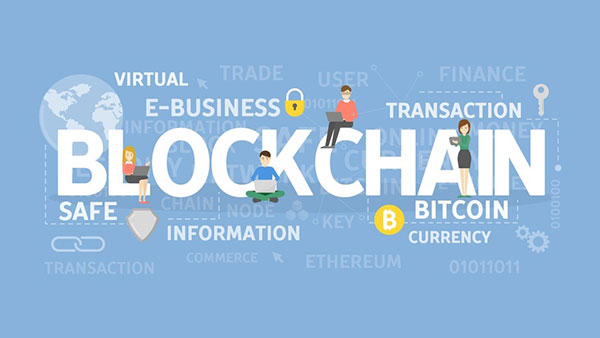 Part 4: An example from the exhibition sector
Let us consider a typical B2B exhibition where demand and supply meet. This occurs separately and individually between each visitor and exhibitor.

A crucial point is creating a smart contract which all the members of the community involved subscribe to. By adhering to clearly defined rules, the exhibitors (supply) offer the community members a specific product or service which gets activated when a certain amount of demand is reached.

For instance, in a mechanics exhibition a supplier of specific components makes an offer with a price which will vary when a certain number of requests from the buyers is reached (demand).

This implies that all the visitors involved can see, verify and take part in this aspect of the transaction with the security and confidence that everything is being transparently, safely, and of course automatically handled by the exhibition.

In order to access this smart contract, visitors and exhibitors must be authorised; in addition, the contract rules shall be written by the organiser of the exhibition, who, for example, may get a commission out of each transaction, or they shall design a process by which the contract is valid only under specific conditions (e.g. throughout the exhibition days).

Part 5: Smart Contracts as possible basis for the exhibitions of the future?
Smart Contracts must be based on clear descriptions for all possible circumstances, conditions and situations. Thus, data management becomes critical to assessing the quality of a smart contract, while Blockchain acquires a strategic importance for the organiser, who would then become a promoter and warrantor of it (beside benefiting from each interaction).

At the same time, it is fundamental to precisely define the data sources which smart contracts are expected to comply with. Smart contracts are meant to receive data and information which are defined and certified by the parties in the contract and which must be identified, controlled and interpreted by the smart contract according to precise rules, which, in turn, represent one of the most relevant and strategic parts in the contract affecting also its final outcome.

This is where the most relevant aspect pertaining the differences between a traditional and a Smart contract comes into play. Smart Contracts are direct products of a code executed on a computer, i.e. a “machine” operated and controlled by the exhibition, available to both demand and supply of the industry.

Part 6: What are the next steps of the exhibition organisers?
It is worth remembering that data science and the distributed value technologies are already present and employed in certain sectors.

Data is increasingly becoming the core of every business, so it is important to note that exhibitions are a key source of data, information, relations, etc., and that this source can be “monetised”.

The organisers who will be able to exploit this new paradigm, by turning their exhibitions into active intermediaries between supply and demand – which is definitely aligned with the model of the exhibition business itself – may have a unique advantage on the competition of their sector.

Click here to read Gallorini's article on Blockchain, featured in the latest edition of Exhibition World.