Seven of the top 15 exhibition companies are German, says study

Measured by revenue in 2018, seven of the world’s top 15 exhibition companies are based in Germany. The results come from a study completed in August 2019 by AUMA – the Association of the German Trade Fair Industry. 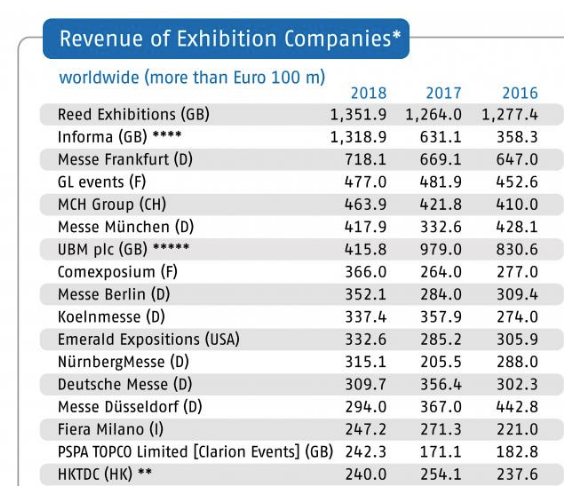 Of the 34 exhibition companies which have revenue totalling more than €100m, nine are based in Germany and eight in the United Kingdom. Companies from Europe dominate this ranking overall, with only four of the 34 companies based outside Europe: Emerald Expositions (USA), Hong Kong Trade Development Council, Tokyo Big Sight and SNIEC Shanghai.

For 2019, however, AUMA is anticipating sales in Germany falling back to approximately €3.8bn, largely due, it claims, to the fact that 2019 is “a year with fewer interval-based events”.