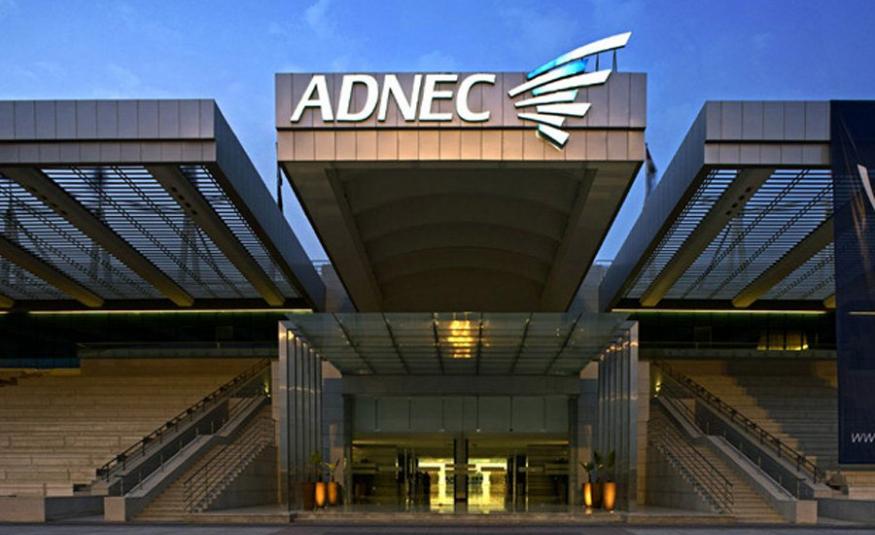 Abu Dhabi is carving its own identity within the UAE

EW’s recent trips to the UAE took in emirates including Dubai, Sharjah and Abu Dhabi.

Talking to exhibition industry stakeholders on the ground in Dubai (see Issue 2 2017) revealed the singularity of vision and obsession with innovation that typifies the emirate.

Abu Dhabi shares a lot of these traits, but its rulers are keen to differentiate its offering, and its exhibition industry reflects this.

The City of Abu Dhabi is the capital, governmental hub and the second most populous city of the UAE after Dubai. Abu Dhabi is also the largest of the UAE’s seven emirates, occupying 87 per cent of the federal absolute monarchy. Abu Dhabi also accounts for about two-thirds of the roughly US$400bn UAE economy.

The city was planned under the guidance of Sheikh Zayed by Japanese architect Dr Takahashi in 1967, initially for a population of 40,000. Its population, now at around 1.45 million, has seen a substantial growth in its infrastructure and architecture, much like its neighbouring emirates.

Abu Dhabi’s exhibition industry is served largely by ADNEC, established in August 2005 under a decree issued by His Highness Sheikh Khalifa Bin Zayed Al Nahyan, president of the UAE and ruler of Abu Dhabi.

ADNEC’s initial task was to develop a venue that would replace the old Abu Dhabi International Exhibition Center and attract more MICE industry into the emirate.

It had the broader goal of enhancing Abu Dhabi’s image as a business, leisure and lifestyle destination.

An ADNEC spokesperson tells EW that the infrastructure of the city of Abu Dhabi is a perfect destination for international exhibitions. “ADNEC is a world class facility that is only a 20 minute drive from the airport. The centre boasts 133,000sqm of state-of-the-art facilities and has a number of hotels in its immediate vicinity within walking distance, including the Hyatt Capital Gate and the Aloft which are integrated into the building itself, making a visitors arrangements seamlessly practical. 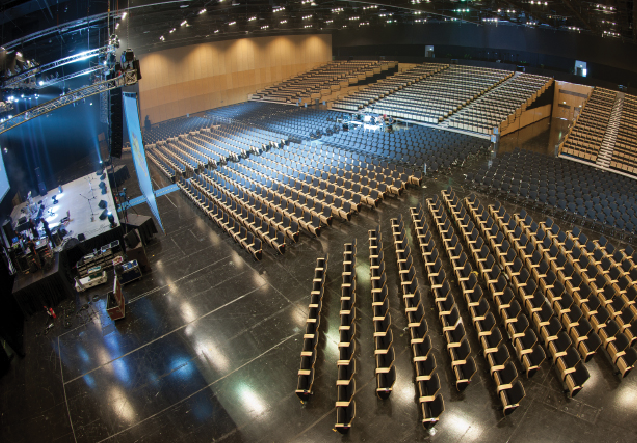 Help is also at hand. “ADNEC provides an integrated approach to hosting exhibitions through subsidiaries such as Capital Hospitality and ADNEC Services which help exhibitors with all their needs from stand build up and rigging to catering and other ancillaries.”

The goal of ADNEC, the spokesperson adds, is to not only attract professionals from various industries around the globe, but also maximise the utility of their time by making their journey as efficient and stress free as possible.

Many elements of ADNEC are testament to this vision. EW’s tour took in a convenient Abu Dhabi International Airport Expo Check-In, which allows delegates to save ample time on airport administration. Restaurants, retail and disability support also feature.

“This commitment to be visitor and business friendly is evidenced by the year-on-year growth in footfall. The venue attracted 1.5 million people attending 480 events last year alone, with projections of continuing the positive trend by the end of 2017,” adds the spokesperson.

The UAE is famous worldwide for its focus on innovation and technological achievement, and its Emirates have drawn up detailed action plans to enable these visions.

In an Oxford Business Group (OBG) report under the theme ‘Charting the Emirate’s Way Forward’, he says the Abu Dhabi Plan seeks a confident and secure society and to build a sustainable, open and globally competitive economy into a strategic blueprint for all three regions in the emirate.

“The plan contains 25 key objectives and 83 programmes that are implemented through a transparent coordination process between Abu Dhabi’s government entities. It also represents strong commitment to achieve this ambitious vision, as we will examine and assess the outcomes of the plan on a quarterly basis, based on performance indicators and periodic reports to ensure a seamless and effective workflow,” adds Sheikh Hazza.

The emirate’s upcoming projects demonstrate this ambition. Dynamic Architecture’s plans for a rotating skyscraper project were recently rekindled. The building, known as the Dynamic Tower, will be built in four dimensions and constantly change shape.

The UAE’s non-oil economy is important to the infrastructural change. These sectors are expected to reach a growth rate of 4.6 per cent by 2020. Although the UAE has the most diversified economy in the GCC, more than 85 per cent of the UAE’s economy was based on the oil exports in 2009. The non-oil portion of income is planned to be increased from about 40 per cent to about 70 per cent.

Further evidence of long-term plans to venture away from oil are apparent in the completion of various Free Zones.

MICE, of course, fits neatly into this emerging vision, and business travel is growing sharply. Abu Dhabi achieved a record 7 per cent rise in hotel guest arrivals over the first four months of 2017, in comparison to the same period in 2016, with 1,601,145 guests checking in. 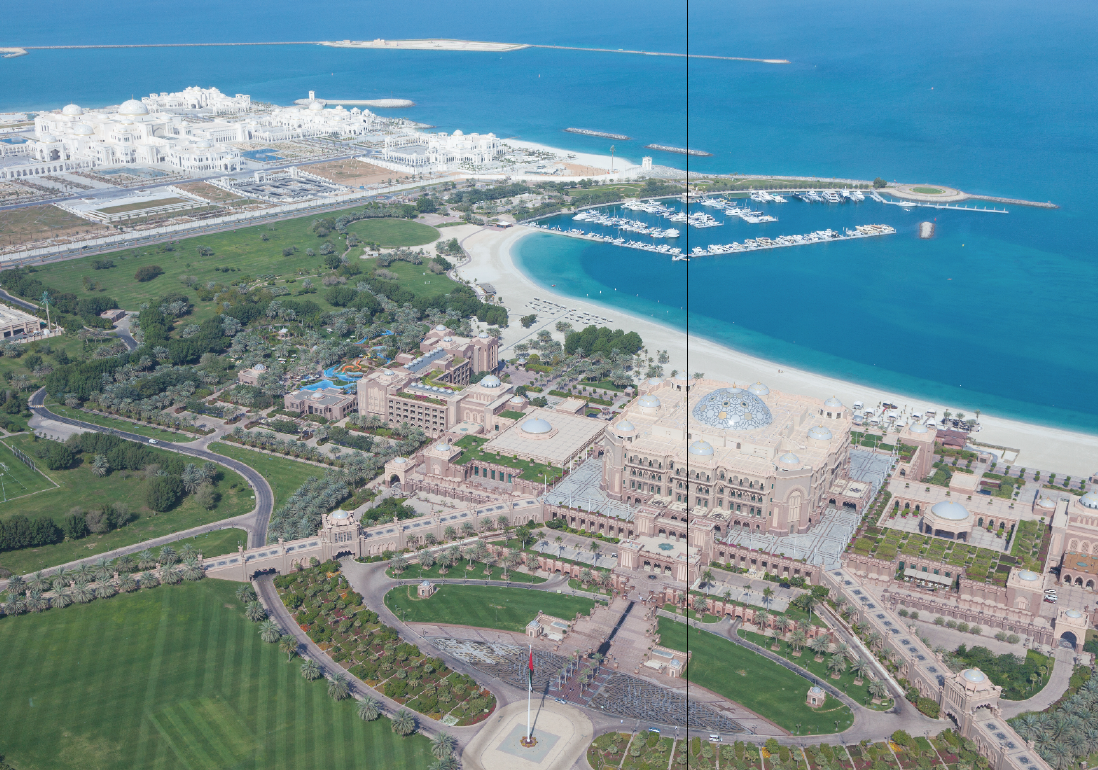 The UK was a key market, with 86,529 British visitors checking into Abu Dhabi hotels in the first third of 2017, a 4 per cent increase year-on-year.

This makes the UK the third largest overseas source market for international visitors into the emirate, behind China and India. HE Saif Saeed Ghobash, director general, TCA Abu Dhabi, said: “Following a record year for the number of guest arrivals into the emirate in 2016, we welcome this increase as we continue to pursue our target of attracting 4.9 million visitors by the end of 2017.

“With our expanding programme of year-round events, entertainment and attractions, complemented by the future Saadiyat Island Cultural District museums – of which Louvre Abu Dhabi is opening later this year – we expect to see further trends of growth for Abu Dhabi.”

Abu Dhabi has set a target of three million business visitors by 2021. Speaking before IMEX Frankfurt in May this year – at which Abu Dhabi Convention Bureau had a large delegation – HE Saif Saeed Ghobash, director general of TCA Abu Dhabi, said:  “2016 was a record-breaking year for Abu Dhabi in terms of visitor numbers, with an estimated 2.2 million visits made for business travel purposes, and we have ambitious targets to grow this to 3 million business visitors by 2021.

“Abu Dhabi offers the necessary industry support to succeed as a hub for business travel, including world-class infrastructure and exhibition facilities such as ADNEC, which reflect the diversity and resilience of the emirate’s MICE sector.”

The director general’s words confirm the important role business tourism plays in Abu Dhabi’s holistic tourism strategy, with the sector expected to contribute 4 per cent of GDP by 2021. 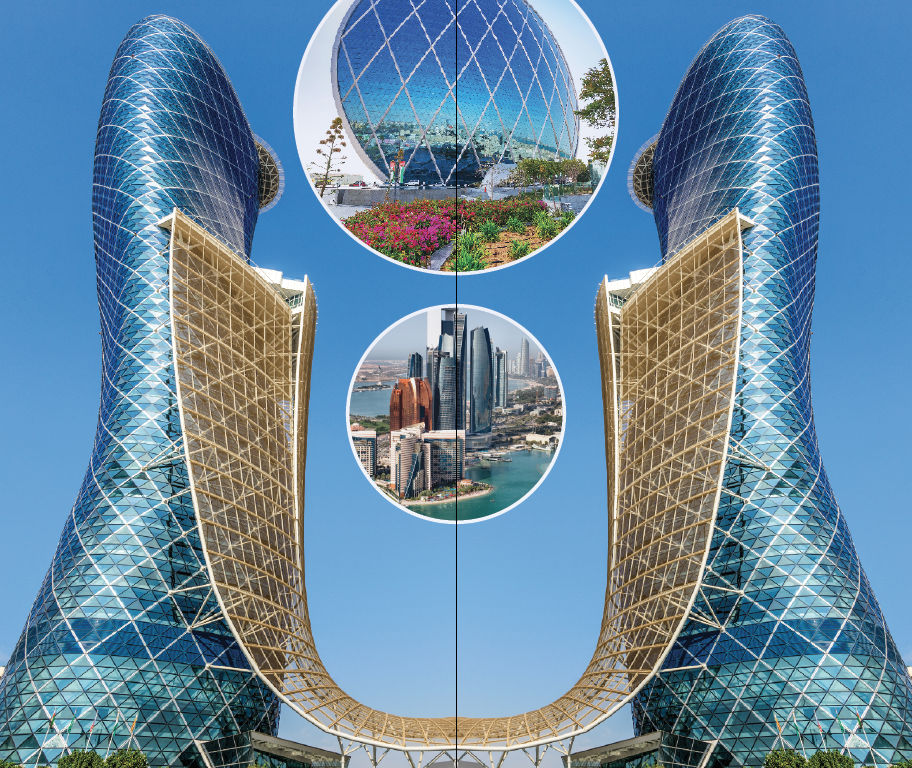 The leading destinations were chosen from an overall list of sixty cities, including major hubs like Sydney, Hong Kong, Cape Town, Moscow, Toronto and many more.

Abu Dhabi ranked highest among participants from the three younger generations – Generation X, Millennials and Generation Z – which were all consistent in placing New York and Abu Dhabi as their top two cities.

Why then, should exhibition planners pick Abu Dhabi over local rivals? This is often a matter of practical concerns over venue choice. However, new hotel openings (detailed in the boxout) and world beating entertainment facilities are a key factor.

Abu Dhabi’s YAS Marina Circuit is unique in the region, while it also boasts a Links golf course. Culturally, the Shiek Zayed Grand Mosque is breathtaking, and the Guggenheim Abu Dhabi on Saadiyat Island will be the largest Guggenheim in the world. Just next door will be the afore mentioned Louvre Abu Dhabi (expected in late 2017).

The environment is also rich in history and beauty, with historic spots like Al Ain and quieter eco havens including Masdar City. These offer respite from the hustle and bustle.

Exhibitions are on the up in Abu Dhabi, and it is easy to see why. 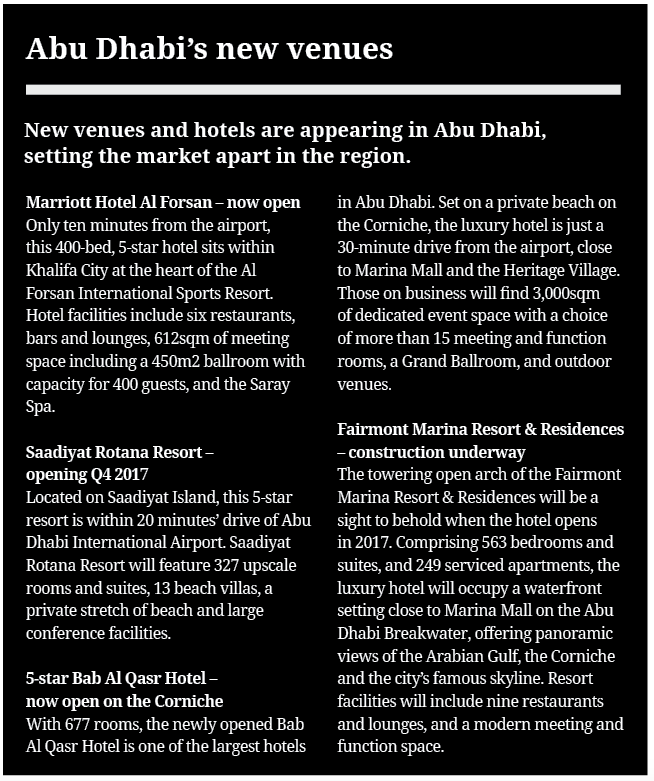