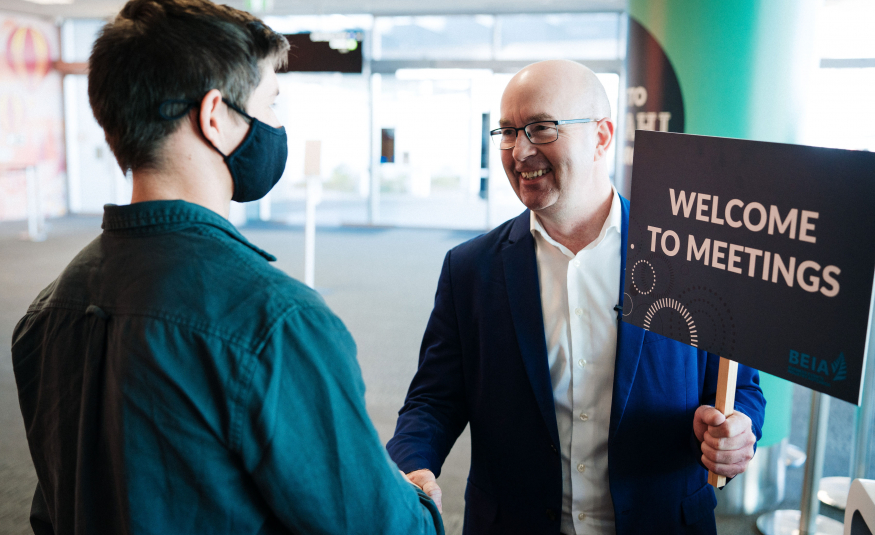 New Zealand’s flagship events industry exhibition, MEETINGS , a two-day event, 15-16 June 2022, rallied the industry at the Te Pae Christchurch Convention Centre. Organisers reported the event was sold out, with 211 stands from 18 New Zealand regions and over 500 buyers, including 110 from Australia.

Speaking at MEETINGS 2022 16 June, BEIA chief executive, Lisa Hopkins said the demand for in-person events was set to soar. And she referenced the New Zealand’s government announcement that pre-departure testing would end on 20 June as welcome news for the industry.

“Part of the drawcard of business events is where they are held. We know world-class infrastructure coupled with good international connections and support including accommodation, hospitality, and tourism make a destination well-rounded and attractive. New Zealand has it all,” Hopkins said.

“The business events sector in New Zealand declined by 78% in spend since 2019. The only way is up, and MEETINGS has shown there is strong demand,” she added.

Tourism New Zealand chief executive, René de Monchy, also speaking at the event, said the business events sector was not only set to recover, but also to thrive.

“Conference and incentive delegates are amongst the highest quality visitors New Zealand can attract. More than just economic impact, business events enrich New Zealand through the sharing of knowledge, expertise, and business opportunities leaving long-lasting legacies for communities,” he said.

“Tourism New Zealand investment will focus on Australia, China and the USA, which made up 60% of international tourism value pre-Covid-19 and will continue to play a major role in high value visitation,” de Monchy added.

Lisa Hopkins said BEIA had a plan to support the development of people for the sector, with initiatives kicking off with Auckland University of Technology (AUT) and Ringa Hora Workforce Development, as well as more tactical engagements within its organisation specifically for members.

“MEETINGS has proven the need to meet in person is stronger than ever. Our work now lies in ensuring we have talented people,” she said.

In partnership with Tourism Talent, BEIA had invited students from Lincoln University’s Event Management school to tour MEETINGS, learning about the sector, and potentially introducing them to future employers.

Melissa Williams, from Claudelands in Waikato said she had been impressed with the show. “We’re talking actual events and dates and numbers and specifics. Many are using this as an opportunity to lock in some plans for the remainder of 2022, as well as looking ahead to future years,” she said.

“We have had several excellent appointments with Australian buyers, as well as strong pipeline of domestic events business, which has been really positive.”

Nikki Wright from the New Zealand Orthopaedic Association said getting inspiring new ideas for her conferences and events had all been possible. “And also just reconnecting with friends and colleagues in the industry. I am looking at bookings for next year and beyond. So it’s good to get some perspective and some future,” she said. “I’ve learned so much about new regions, for example I knew nothing about the Mackenzie region and there is definite scope there. I’m so educated now.”